The Dental Corps is celebrating its 100th anniversary this year, and historian Andre Sobocinski is editing a history of the Corps. Here is the 100th photograph we posted to Flickr: Posted by Mike Rhode at 6:27 AM No comments: I just ran across 4 pictures of the influenza epidemic at the end of World War I. The Grog, Summer 2012 - A Journal of Navy Medical History and Culture

It is with great pleasure that we present to you the summer 2012 edition of THE GROG. In our attempt to meet our standards of variety, we offer you original articles on: Navy Medicine in the War of 1812, A Look Medicine and Hygiene in the Royal Navy, A Brief History of the Navy Mobile Care Team Program, Notes on the first African-American in the Dental Corps, and much more. As always, we hope you enjoy this humble tour of the seas of Navy medical culture and heritage.

THE GROG is accessible through the link below. Feel free to share with anyone with an interest in history. If you prefer a PDF version to be sent directly to your inbox please let us know. For all those who have already requested to be put on the PDF mailing list a low resolution version will be sent to you shortly.

Posted by Mike Rhode at 7:41 AM No comments: 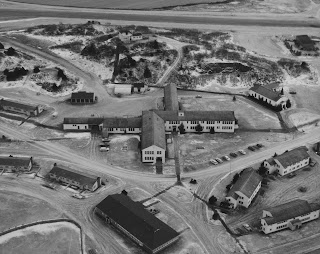 In 1964, a massive earthquake and tidal wave struck Alaska. The hospital at the Naval Air Station in Kodiak was affected, although not as badly as it could have been.The original of this letter, in our Navy Medicine Historical Collection - Facilities - Kodiak, AK file, is a photocopy on thermal paper that is rapidly fading. This transcription is as accurate as I could make it, including punctuation and capitalization.
2 April 1964

I received your letter this morning.  All of the nurses read it and were very pleased to hear from you. We have had no way or means of communication until the last day or so. We were receiving news reports from the States, and they sounded as if we no longer existed. I am happy to report we are all healthy, wiser but cold.

Friday around 1630 we had our first earthquake lasting about four minutes.  I have been in others, but none so severe.  Some of the ceiling lights in the hospital fell, and the wall cracked along the staircase to second floor.  Around 1800 we heard our first warning of the Tidal Wave.  Patients  and personnel were out of the hospital and evacuated to higher ground in a matter of minutes.

Late Friday night through the use of an emergency generator our lights were back in use.  We have had very little heat, but do have some electric heaters now to help keep the patients warm.  A large power generator was flown in yesterday and we have hopes of heat and hot water sometime today.

We have closed second floor and set up emergency OB on the first floor to conserve on heat.  We have had our first OB last night have about five more that are due.

The damage was quite extensive here on the Base.  One or two of the hangers were badly damaged, and I heard they dynamited the Bowling Alley, and several other buildings that were beyond hopes of repair.

I went into Kodiak several days ago, and it is unbelievable.  The Tidal Wave lifted huge boats and set them on top of buildings, and in the main streets of town.  The famous Naughtons Bakery was heavily damaged, but I am sure they will eventually be back in operation.  The people have been very good in helping each other.  We sent a medical group in for two days to help give Typhoid Vaccine.

We truly are grateful we had no casualties on Base.  Two dependents lost their lives in outlying areas. The Red Cross was still working on the casualty list in the city of Kodiak yesterday, and having some difficulty with identification.

I inquired about LT Reichenbach.  Dr. Baker stationed here at Kodiak was in Anchorage when the earthquake occurred.   He saw LT Reichenbach on Saturday morning.  He checked the manifest just before he returned and her name was not listed as returning to the states.  I think all her household gear was lost here in storage, but will find out for certain in a few days.  We have her car here at quarters so at least that was saved.  We are going to try and contact her tomorrow.  I sent her a check on Thursday and we don't know whether it reached her or not.

I thought the Bureau had been informed as to what was happening out here.  We are still feeling slight tremors.  If anything else should occur I will try and send you the information as soon as possible.  Our best means of communication is to have pilots hand carry our mail back to the states.  We do have telegram service, but they are so far behind.

We all feel so much better now.  The heat just came on and we will soon have our first shower in six days.  Father Lavin has been real nice to us.  He brought us two space heaters and about eight large votive lights so that we would have better light at night.  Some of the nurses used hot rocks in their beds to keep warm.

Posted by Mike Rhode at 8:09 AM No comments: 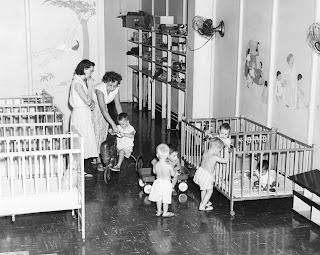 Please check them out. We're adding more every week. Feel free to write
in with requests.
Posted by Mike Rhode at 12:17 PM No comments: Some images of Naval Hospital Corona were missed in our 2009 scanning project, and I've just scanned and put them online here.

Here's some information on the hospital that Andre Sobocinski posted last year:

As a Navy hospital commissioned in World War II, Corona was unique. It was not uncommon for the Navy to take over hotels and even on one occasion a former estate, but the hospital established at Corona was different. Constructed in the 1920’s as a luxury hotel and resort called the Norconian, it owed more to San Simeon than to the Ritz. And like Hearst’s home, it served as the playground for the who’s who of Hollywood.

Architecturally, it offered guests a festival of wrought iron, art deco, and Spanish elements complete with resplendent pillars, marble floors, and lavish Heinsbergen murals. Guests could stay in one of the luxurious 250-bedrooms, and access Louis IV-inspired lounges, dining rooms, bath houses and Olympic-sized pools, and of course, a man-made lake. These amenities would later play a pivotal role in the rehabilitation of hundreds of thousands of wounded servicemen returning home from World War II and later the Korean War. It is remarkable that many of these amenities and architectural features like the murals still exist at the old property today. As a military hospital, Corona proved to be a rarity among its Army and Navy counterparts in that it had a Hollywood star as a chairman of its Naval Aid Auxiliary Hospital Visiting Committee. Kay Francis, once the most highly paid star in Hollywood, headed this cultural affairs committee. Every Thursday, Francis would bring “friends” such as Humphrey Bogart, James Cagney, Claudette Colbert, Cary Grant, Red Skelton, and others, to the hospital to meet with patients. And thanks to her connections, the hospital hosted numerous radio programs, big band concerts, and USO shows. In the 1950’s, the hospital was used by the Navy as a testing bed for new techniques in Occupational and Physical therapy, and the treatment of diseases like tuberculosis. In fact, the Navy saw fit to use the hospital as setting for several important educational and training films now found at the National Archives. Some of these films even featured the celebrities that frequented the hospital in World War II.

The opinion or assertions contained herein are the private views of the authors and are not to be construed as official or reflecting the views of the U.S. Department of Defense, the U.S. Navy or the Bureau of Medicine & Surgery.